A standoff between importers and exporters on what price to start the season off on has put the velvet industry on edge as tensions rise with only small volumes traded as of 28 November. Additionally, a changing Chinese regulation will affect importers of NZ velvet and has caused further pressure at this important time.

At the time of writing this edition – tensions were high, with NZ freezers rapidly filling up and only small quantities committed-to by the usual importers. Exporters had been holding off to get the best price for farmers, and pressure was mounting in some areas to get the season underway. While fundamental market indicators pointed to a softening in prices that reflected a change in currency variation between the seasons and jelly tip prices dropping, NZ’s main exporters remained hopeful of a season that shouldn’t drop too far.

Figure 1: A significant increase in the NZ dollar against our main velvet market destinations, versus the same time last year.

However, activity by one or two traders in the markets resulted in some hesitation by others to commit, with concern that this activity may drop prices and devalue inventory. There have been several arguments put forward by some traders in an attempt to drive down prices, including that NZ will produce 700 tonnes of velvet this year - which is significantly more than our estimates.

China is going through significant changes generally to improve the safety of many of its domestic and imported food products. Velvet will now need to be imported as a TCM ingredient, which will require a new set of measures. It is these new measures and the way that velvet now generally has to be handled in China that have triggered some hold-ups on issuing of import permits. As velvet needs to be imported as a TCM ingredient, importers/processors must hold a pharmaceutical trading license, which involves a lengthy approval process and a processing facility that meets traditional pharmaceutical requirements. Failing to meet these standards has resulted in the refusal to grant new import permits to any importers to date (although DINZ understands that one or two facilities may comply with the new requirements). Reportedly, there is still some quota left on existing permits that is moving through normal channels slowly into China.

This situation is constantly evolving and by the time this article is printed, the situation would have likely moved on.

On the NZ end, MPI is working with its Chinese counterpart to ensure that the way NZ velvet is produced, removed, transported, processed and exported meets Chinese Law.

In mid-November, a team of Chinese government officials came to NZ to audit the NZ velvet industry. MPI report that the Chinese regulators were generally impressed with what they saw. However, as expected there will likely need to be some changes to ensure that velvet exported to China complies with Chinese law. New measures will take time to be agreed and finalised, although MPI think that they would likely be implemented by the middle of next year (ideally around the quieter period).

Reportedly the Chinese auditors will roll out the new measures to other velvet supplying countries, now they have a better understanding from the world leaders in velvet production.

Many thanks to all those that worked with MPI to ensure the audit went as smoothly as possible. A particular thanks to the team at Peel Forest Estate who hosted a lunch for the delegation – which provided some great kiwi hospitality.

While the slow start to the season is frustrating and the lack of new import permits being issued in China is concerning, it is important to note that NZ largest consumer for velvet market is Korea. DINZ would estimate that 60 – 65% of our velvet production ends up consumed in South Korea and the underlying demand in both China and Korea appears stable. Although many Korean importers were holding-off committing at the start of the season, many will need to make arrangements to start processing in the new year for the peak consumption period.

As a part of a wider Chuseok (Korean Thanksgiving) promotion, Deer Industry New Zealand assisted Korean food giant KGC with a sales promotion for their successful product, Cheong-nuk-sam. 21 of KGC’s top sales and senior marketing staff came to visit the country of the products premium ingredient. As part of the NZ industry’s contribution - to ensure a deer connection - the winners of the promotion must try NZ venison and visit a deer farm during their travel. KGC’s Marketing Manager reported another successful year’s sales of Cheong-nuk-sam.

A huge thanks to DFA Chairman, David Morgan for hosting the group with an amazing educational experience on Raincliff Station. David and Brychan had prepared well to showcase their new yards along with some magnificent stags in full velvet for the farm tour. 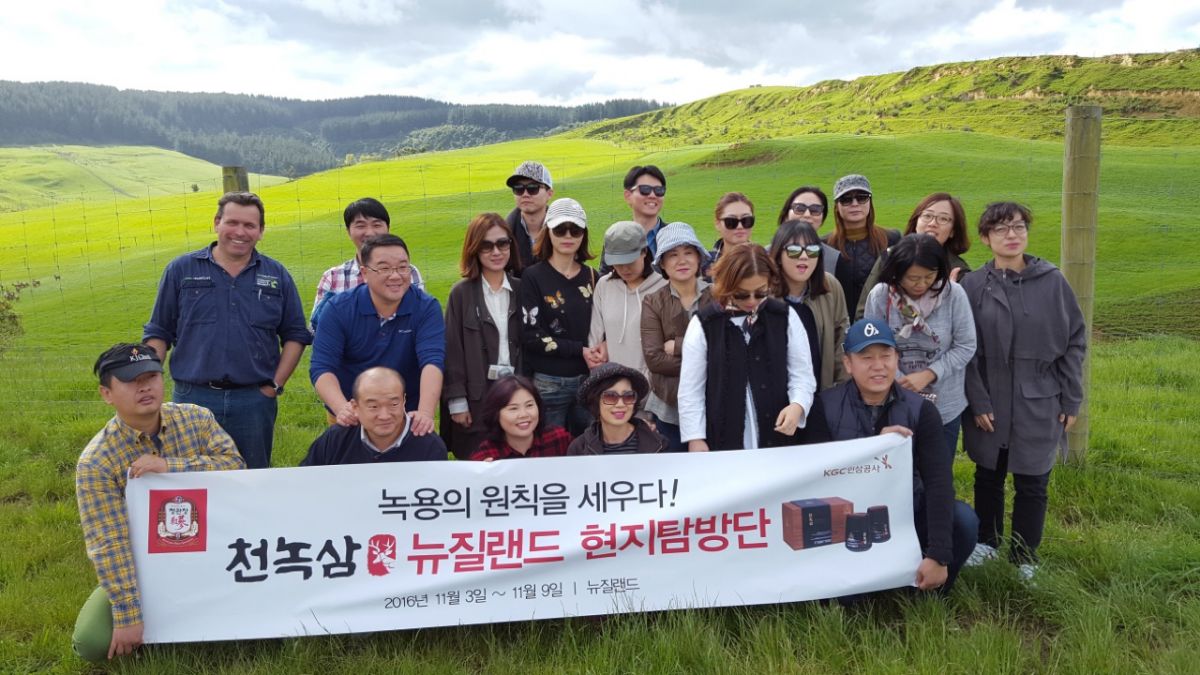 DFA Chairman David Morgan with the KGC delegation at Raincliff

Other work continues in Korea’s healthy food market with the visit by Korea’s highest profile celebrity Oriental Medicine Doctor, Dr Lee. DINZ assisted PGGWrightson who hosted a celebrity duo, along with 12 other members of their delegation. PGGWrightson had organised spectacular farms for the filming to be shot – promoting a product that will now contain New Zealand velvet. The product was launched two years ago, achieving significant success. The longer term impact of the visit will benefit the wider NZ velvet industry. The marketers, film crew and celebrities left with a positive view of NZ velvet and great promotional stories to tell Korean consumers. Many thanks to those who were involved for making the visitors feel so welcome. 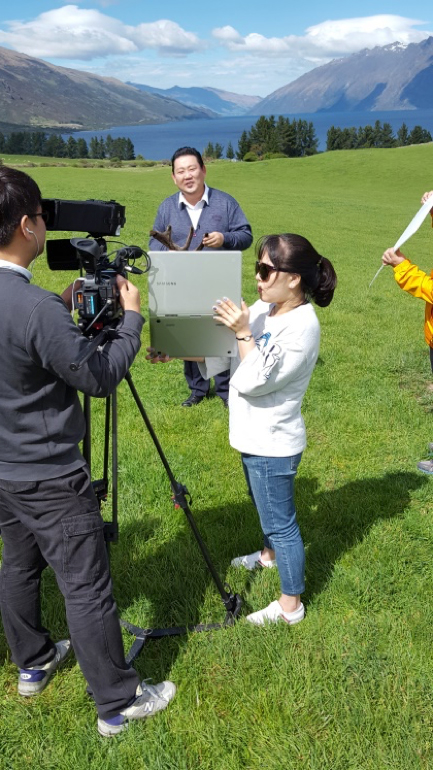