Several major velvet trades were finally transacted around Christmas, although prices were lower than many exporters had originally hoped for. There was an initial stand-off caused by usual pre-season market posturing, which was somewhat fuelled by last minute market complications.

Recently released export statistics show that total exports of velvet in Sept, Oct and Nov 2016 were about $2.5m – not far from the 2015 export figures. These are not the peak months for velvet sales, but it does suggest that trade has been ticking-over quietly throughout the season. December statistics will reveal more once they are made available - however anecdotal reports suggest that the trade trend continued to be buoyant through to January. 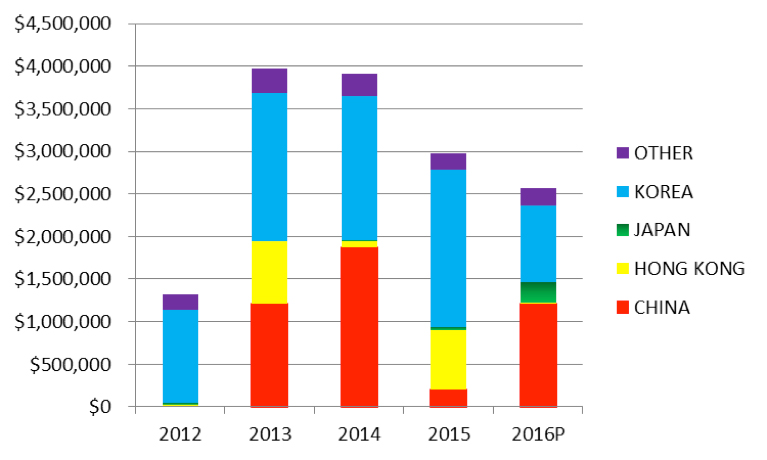 Despite a set back with regulatory changes disrupting issuance of import licenses, Chinese processors were still active at the early part of the season. According to some exporters, there was around 100 tonnes of unused quota remaining from the previous year’s Chinese velvet import permits that hadn’t expired.  This provided enough access to meet some of the early season demand.

In recent weeks, Chinese regulators have offerred a work-around solution to help the importers obtain the necessary import permits for this season. At the time of writing, no importers had received permits, although most were confident they would be issued soon. It is unknown what impact (if any) this will have on sales as the main consumption period is nearing completion.

To date, direct exports to Korea have been lower than expected. Korea, the largest consumer of NZ velvet, has no known impediments to import NZ velvet. In fact, on 1 January 2017, there was a further tariff rate cut for processed NZ velvet as agreed under the Free Trade Agreement. The abolishment of the 20% tariff over 15 years for processed NZ velvet provides a reasonably unique advantage over competing countries. Processed velvet from Australia or China carries the full 20% tariff, whereas NZ processed velvet is now 16% (and dropping).

Korean food companies report that demand for their velvet-based products is growing. Official import statistics from Korea support a view that consumption in Korea is strong. Total velvet imports to Korea from all countries were 596 tonnes in the 12 months to 30 November 2016, up from 531 tonnes in the previous 12 months. Fewer direct purchases by Korean food companies at the start of the season are likely a result of better inventory management and cautiousness on pricing levels with the disruptions at the start of the season.

Reportedly, Chinese consumers spent around NZ$90 billion dollars over the Chinese New Year period (27 January to 2 February 2017). This was up 48.1 percent from last year for spending by Chinese consumers in China and overseas.

While it seems a long way away (and we are still dealing with this season), preparations are underway for the 2017/18 season. As a result of negotiations with Chinese regulators, NZ’s Ministry for Primary Industries will be requiring improvements to the way velvet is produced and handled throughout the supply chain.

The National Velvet Standards Body (NVSB) has agreed to develop and implement additional measures to ensure NZ velvet is exported to the safest and highest quality possible. As well as standard animal welfare obligations, there will be increased focus on shed hygiene, cold storage integrity and velvet traceability.

Chinese regulators conducted a sample audit of the NZ velvet industry in November 2016. While they were generally happy with what they saw, they raised a couple of areas for improvement. These areas are consistent with where the industry is heading with an increased focus on velvet as a high value food and pharmaceutical ingredient. It is important that NZ provides a safe and high quality product.

Using the basis of existing rules governing the removal of velvet (through its velvet manual), the NVSB will work with MPI to expand the NVSB programme slightly. The additional measures will be implemented for all velvet intended for human consumption, regardless of its geographic market.

More information will become available over the next few months. In the meantime, please start to think about your velvetting area and possible improvements that may need to occur.  Also, we recommend measuring the performance of your velvet freezer(s). If they are not capable of reaching an ambient temperature of at least -15°C (when fully loaded), we recommend considering an upgrade.